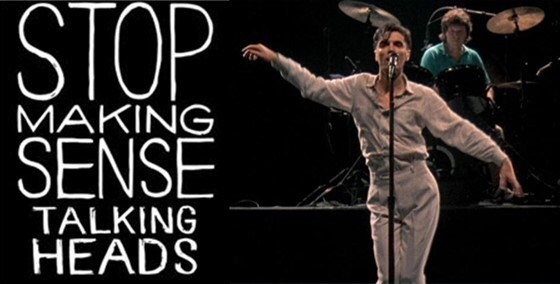 Before I get into the meat of this record, it is important to disclose which version of this record I will focus on. There are a few different versions of this album and I am writing about the “Special New Edition.” Therefore, some track placements will differ from your version and there may be new tracks entirely. The reason I chose this version is that it is readily available on Spotify and includes some of my favourite tracks. This version is not the original cut, but it is based on the soundtrack. With that context out of the way, let’s get into one of the best live records ever constructed.

The Talking Heads is a fascinating band. They render terms like “new – wave” and “post – punk” both irrelevant and trite. Calling The Talking Heads simply a “post – punk” band is like saying “Yeah, that Monet guy….you know…he painted those haystacks.” It’s like having the robot from Big Hero 6 describe B.B. King’s guitar playing on The Thrill is Gone. In some respects The Talking Heads is not a band at all, but a physical manifestation of a David Byrne musical fever dream. Rarely can a band employ aspects of funk, pop, soul, punk and gospel in such a seamless and engaging manner. Byrne, Frantz, Harrison and Weymouth are at the height of their powers on this record, which translates into a showcase of how this genre bending can bring an audience to its knees, proclaiming “Hallelujah!”

The record itself is a soundtrack based on a movie from Jonathan Demme, who is best known for Silence of the Lambs and Philadelphia. Even though Demme was best known for his dramas and thrillers, he has a catalogue of music documentaries including Neil Young and Justin Timberlake. However, most fans of the record may not even know the movie exists. Demme does a wonderful job capturing the vibe of the band and David Byrne’s stage presence. If you have not seen the movie, I highly recommend you watch it and check out the Blank Check podcast where David and Griffin review the film. On a side note, you should listen to that podcast anyway, because it is amazing.

The “Special New Edition” is so vast that I will not be able to cover all the tracks. Moreover, this is not a movie review, so I will focus on the songs and not the band’s performance. However, I will spend most of the review looking at key tracks that will give you a good sense of the record. With that said, let’s start with the first track, Psycho Killer. An amazing opening track with one of the best acoustic guitar riffs in modern music. This track highlights the band’s CBGB’s punk side with sparse instrumentation punctuated by a razor sharp guitar. David Byrne’s vocals vacillate between a deep melancholy to a horse unhinged mania. Between a bridge sung in French and lyrics depicting the mind of a psycho killer, this track highlights the band’s experimentation and punk roots.

Later on side one we find one of the band’s biggest hits and their first genuine mainstream crossover. Burning Down the House is an amazing track on its studio release, but on this record the live version showcases the band firing on all cylinders. Tina Weymouth’s baseline and Jerry Harrison’s keyboard give the song a deep funk feel, which permeates throughout the track. Weymouth later said that the track itself was inspired from a P – Funk show she and Chris Frantz attended, where the audience chanted “Burn Down The House!” Let’s talk about Frantz’s drums for a little bit. His driving percussion not only give the song driving force, but they snap and explode off the track with aggression. The musical tension between Tina, Chris and Jerry gives the track interest and complexity, while still laying the foundation for Byrne’s vocals. David Byrne himself seems to mirror the track’s central conflict between funk and punk, as he seamlessly moves from a soulful falsetto to an urgent Patti Smith inspired scream. In my opinion, this live track far outpaces its studio predecessor.

On the original soundtrack, Girlfriend is Better closes out side one; however, on the special version it is buried towards the bottom of the record. Either way, this is a sharp funk synth track with layers of P – Funk and Prince woven throughout. Lyrically, the song’s surface meaning is at odds with the sharp syth and doubts lying underneath. Superficially, it seems as if Byrne if bragging about his exploits, but doubt lies beneath, “And nothing is better than this, is it?” Harrison wields a machine gun of sharp syth riffs, which shatter Byrne’s facade and give the track and acid funk feel. Moreover, the title Stop Making Sense comes from this track, “As we get older and stop making sense / You won’t find her waiting long.” For me, the synth is a real standout on this track and underlines the band’s funk influences.

As the record progresses, we move into the gospel side of the band. Even though the funk and punk influences are front and centre, the excellent backing vocals gives these latter tracks a gospel / Motown vibe that often gets overlooked when talking about The Talking Heads. Once in a Lifetime showcases Byrne at his best lyrically when he addresses the audience in the cadence of a traveling Evangelistic minister preaching salvation. As he preaches to his congregation, Byrne is backed by Waymouth’s deep funk base complimented by etherial keyboards and pounding drums. However, the track really shines with backing vocal work by Ednah Holt and Lynn Mabry who have had experience backing Sly and the Family Stone, as well as P – Funk. They give the chorus the gospel and soulful sound that brings the whole track together into a transcendental experience. Lyrics such as, “Letting the days go by, let the water hold me down/ Letting the days go by, water flowing underground / Into the blue again after the money’s gone / Once in a lifetime, water flowing underground” take on an added importance with those backing vocals. Byrne, Holt and Mabry have their hands outstretched offering salvation, and you come running to the light.

One of the best parts of a concert is seeing what covers the band is going to play. You have a few tracks in mind and wait with anticipation as the lead singer approaches the mic and says “Here’s something from one of our favourite bands. I hope you like it.” The Talking Heads are no exception. They close out the original record with a cover of Al Green’s Take Me to the River, which the band gives the CBGB’s treatment. Al Green’s original gospel soul is evident in Holt’s and Mabry’s backing vocals, as well as Waymouth’s baseline. However, Byrne’s sharp vocal delivery and the snap on Frantz’s drums gives the track an edge the band developed playing clubs in the late 70s. In some ways, this song is the manifestation of Byrne’s fever dream I spoke about earlier. Byrne is the Dr. Frankenstein who effortlessly sews together funk keyboard / base, with punk inspired drums and gospel / soul infused backing tracks. The thread holding all of these disparate pieces together is Byrne’s vocal and his ability to move from soulful to aggressive and frenzied when the song calls for it. For me, this song is a prime example of everything I love about this record.

The special addition includes a number of tracks not found on the original in order to save space. One bonus track that deserves some attention is Crosseyed and Painless, which is the last song on the record. This is a deep cut well regarded in Talking Heads fan circles. The track itself combines elements of funk, African rhythms and punk to create a mural of sonic textures and feels. In one moment, you hear African congas with a funk bass line, only to be abruptly cut in half by a samurai sword of a screeching guitar riff. Lyrically, Byrne decries facts and how society can lie to you. As the song ends he descends into a rap delivery with the lyrics, “Facts don’t do what I want them to do / Facts just twist the truth around.” This is a great way to end the record and a nice treat for fans who love this cut.

All and all, Stop Making Sense is one of my favourite live records, and one of the best live records recorded. Not only is the track selection exquisite, but this record presents Byrne, Frantz, Waymouth and Harrison at their peak. Tracks you think you know are brought to new heights both vocally and musically. Not to mention the wonderful addition of Holt and Mabry on backing vocals, who give the tail end of this record a depth of sound you don’t find in studio recordings. The album is at times warm, soulful, frenzied, aggressive, urgent, timeless, sexy and funky. It is difficult to find all of those flavours in one record, but instead of making a disconnected mess, The Talking Heads mix those ingredients into a five star meal.