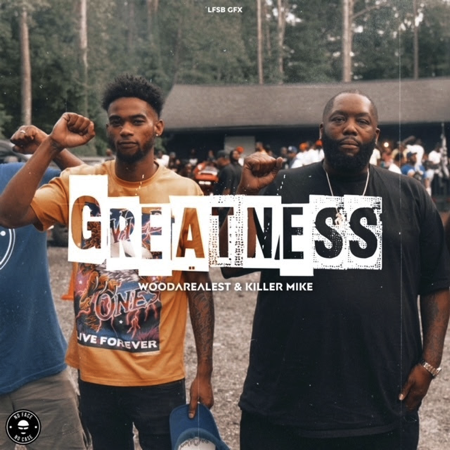 While people focused on East Coast and West Coast rap, they slept on Atlanta. Georgia has put out some amazing artists like T.L.C., Gucci Mane, Outkast, Future, Migos and 6lack. Atlanta is continuing to push boundaries with a new trap style with slick vocals and high production. Rappers pushing that front are Lil Baby and WooDaRealest. Now, WooDaRealest had a chance meeting with one of Atlanta’s old hip hop guard, Killer Mike, at a rally in Georgia. What came out of that meeting is the track Greatness, which showcases the old school Atlanta hip hop scene with the You Tube and Insta generation of southern trap. The end produce is a socially active banger that all hip hop lovers will enjoy.

Now, I must admit that I have not heard anything from WooDaRealest before this track. I do like 6lack, but trap and Atlanta rap from about 2015 until now has not really grabbed me. I find that it is overproduced and it is missing the edge found in music by RTJ or The Roots. However, Killer Mike was billed on this track, so it got my attention. It kicks off with some keyboard and deep bass, which quickly makes room for telltale trap tinny electro percussion. There is a good mix of old school bass driven hip hop and trap electronica, so you are not overwhelmed by either style.

With Killer Mike on the track, I knew that it would have a political edge focusing on race. However, I could not see where WooDaRealest would fit. WooDaRealest jumps in with his slick vocals and impeccable delivery, which comes across as a mix between honey and glitter. However, his verses are far from his light vocal. He raps about white double standards, being proud to be a young black man and how white people listen to his songs, but do not stand with him, “When my song come on they sing along wit me…They don’t give a damn about me.” I found his lyrics had a nuance and depth I was not expecting.

Now, when Killer Mike kicks in the revolution truly begins. If WooDaRealest is the young revolutionary at the front of the Black Lives Matter march, Killer Mike is the activist veteran taking a flamethrower to the system. Mike talks about not bowing to white supremacy, “so I refuse to kiss these crackers’ ass.” He also espouses how black people need to organise the revolution and black people have to “save ourselves” from oppressive systems and police brutality. These are lyrics that pound the streets and substitute nuance for sheer force.