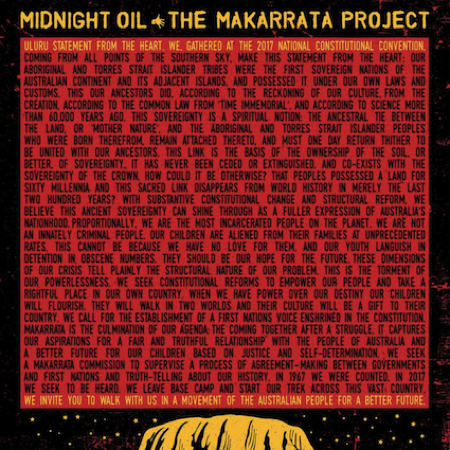 Australia’s iconic band Midnight Oil is back with their first single in 17 years. It is part of the The Makarrata Project, which is a seven track record featuring Indigenous artists collaborating with Midnight Oil on First Nations’ rights. The record is a who’s who of prominent and talented Indigenous and Torres Straight Island artists, such as: Dan Sultan, Gurrumul, Jessica Mauboy, Kev Carmody (who is amazing) and Troy Cassar-Daley. This single and record has become more poignant as it is the last recording for bassist Bones Hillman, who died from cancer recently.

The track itself has some of the classic rock / punk notes the band is known for. Similar to tracks like Beds are Burning, Blue Sky Mine and King of the Mountain there are razor sharp guitar licks alongside snappy tight percussion. Most importantly, Peter Garrett’s famous vocal cuts through the rock noise with surgical precision. Unlike other Midnight Oil tracks, the band fills out the sound with a ska influenced brass section mixed with Indigenous instruments. On the outside, this cauldron of various musical genres may seem like incoherent babble as each one battles for centre stage. However, each sound builds on each other and creates musical layers that elevate the song from a garage jam to a rock anthem. I think this musical layering gives the track a full and energetic sound.

Having said all that, Garrett’s cross between rock frontman and punk activist vocal delivery is crucial. Much like pervious Oil tracks, the band rails against the white colonisation of Australia and the government’s historical attempts to whitewash Aboriginal culture and history. The title itself, Gadigal Land, comes from the name of the Aboriginal mob who originally lived on and called Sydney home. So, right from the outset Oil is clearly reminding the listener that Australia is Aboriginal land and it is time for white colonisers to face the destruction they have caused over generations. The vocals and instrumentation is on full attack against the whiteness that tried to eradicate Aboriginal culture. In the middle of the track different Indigenous artists proudly shout different Aboriginal mobs that make up Australia in and act of defiance.

This single, and the entire record, is a return to form for Midnight Oil. Their punk rage and Indigenous rights activism, which has been a common theme for decades, has a sense of urgency that fits larger global social movements. In Australia, many people saw the Black Lives Matter movement as something unique to the US. However, Midnight Oil, Dan Sultan, Kaleena Briggs, Bunna Lawrie and other Indigenous artists remind us that Aboriginal and Torres Straight Islander people have been fighting that fight for decades. Australia is not immune from the white supremacist systems at the heart of the Black Lives Matter movement and need to face up to that history in order to move forward.

1 comment on “Midnight Oil’s: Gadigal Land: First Nations, Always Was – Always Will Be”