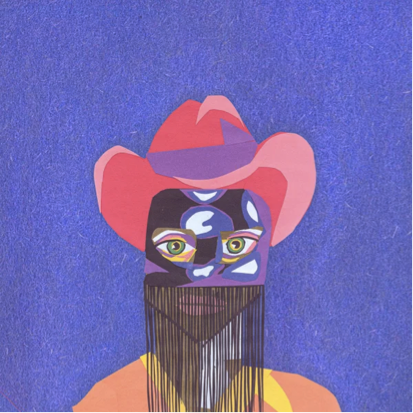 Orville Peck is a rich tapestry of contradictions. To listen to his music you are transported to the traditional country of Buck Owens or Glen Campbell, mixed with Roy Orbison’s honey sweet crooning. You think that you have found a lost country artist from the late 60s or early 70s. However, when you see him with his cowboy hat, tattoos and black bandit mask fringed with gold or pink yarn, you think you stumbled upon a 2020s punk avant garde performance artist. These contradictions is what makes Orville Peck one of the most original modern artists in music.

First of all, I need to thank Hector Alfonso from Espinosa Cigars for turning me onto this artist. Seeing his performance and listening to his mesmerising voice gave me the feeling of a diver who opens a ragged mollusk to find a glistening pearl. It is a mix of awe and excitement. It is what makes music so amazing. Listening to Orville is like listening to music for the first time. You experience a mix of childlike wonder and opportunity. If music can produce an artist like Orville Peck, what else am I missing?

Musically, No Glory in the West covers themes found throughout country music. The closest comparison I can think of is Johnny Cash’s Don’t Bring Your Guns to Town. In both cases, the song upends romantic depictions of the west and exposes the cutthroat nature of a lawless self-centred society. Orville sings about how the west is not about glory, but built on con men and violence. In this west, “you take what you can get” and struggle to survive. Similarly, Cash’s song shows how paintings of rolling hills and riding into the sunset is built upon violence and blood. In a modern sense, Orville is showing how a romanticised past, in this case the west, whitewashes over struggle and isolation. Glory in this track is exposed as a rationalisation for those in power using violence to take advantage of people. There is no glory, only pain. Now, this may seem extraordinarily dark, but it follows traditional country tropes of how following glory can lead to one’s demise.

Orville’s beautiful vocal hides this bitter pill within a sea of honey. His crooning country vocal brings up images of riding a horse through the desert or sitting by the campfire. He appears as a traveling western bard, stopping by your camp to warn you about the dangers in the city. I am in love with his voice. It is close to what Colter Wall is doing with his 2018 record Songs of the Plains. In both cases, they are using their deep and rich vocal styles to breathe new life into traditional country folk.

Listening to Orville Peck begs the question, why are so many people drawn to straight up vintage country? I think it lies in execution. For all the performance art behind Orville’s theatrical appearance there is a genuineness to his music that sets it apart from superficial music. Behind his fringed Lone Ranger bandit mask is and emotional depth and soul that connects with the human experience. Jump in this wagon train now, because Orville Peck is going places.

Listen to No Glory in the West

1 comment on “Orville Peck’s No Glory in the West: Don’t Judge a Book by its Cover”

I need all of it. @cigar_coop
Care package from the US. Love it.
Love this! Hits like a truck with great flavour. @thecrownedheads @cigarhustler
Colour