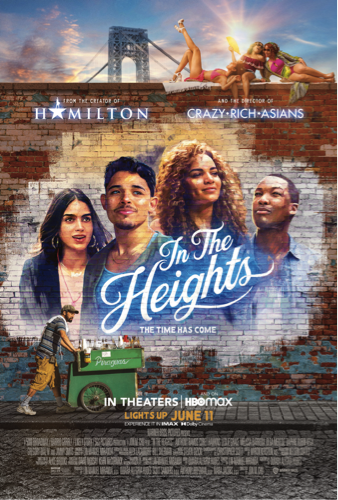 Soundtracks often miss out on new music reviews, but should not be overlooked. Lin-Manuel Miranda has recently adapted his musical In the Heights to the big screen with a cast full of Broadway and cinema talent. Even though this soundtrack falls under new music, Miranda started working on a draft of In the Heights as a sophomore in college in 1999 and first staged it as one act in 2000. After the success of Hamilton on Disney+, it was time to bring his initial work to cinemas and on demand. Although most of the music is from his initial work, lyrics and tracks have been re-worked and deserve a feature in our new music reviews section.

The track 96,000 illustrates everything I like about the musical and what I appreciate about Miranda’s work. His hip hop verses are clever and funny, it has a tremendous energy and Miranda is able to jump to different musical genres quite easily. First of all, this track is grounded in hip hop, which is Miranda’s primary medium. His rhymes are clever and delivered extremely well by Anthony Ramos and Corey Hawkins, who describe how they would spend their $96,000 Lotto winnings. This first section of the track evolves into a rap battle with lyrics like “If you’re scared of the bull, get out the rodeo / Yo, I got more flows than Obi-Won Kenobio.” The fun and charisma of this section both jumps off the screen and shines in the track.

Corey Hawkins then moves into a smooth R&B Cody Chesnutt vibe. He sings about driving slowly through the block and having no cares in the world because he works for himself. Moreover, he sings about how he would use the money to throw the biggest block party ever for all of his friends in The Heights. This short part highlights the musical’s two main themes, which are family/culture and chasing the American dream.

The track then moves into a R&B Beyoncé / Destiny’s Child type pop with Stephanie Beatriz, Dascha Polanco and Daphne Rubin-Vega singing about what they would go with “96 Gs.” The trio sings about traveling to exotic locations or getting a new lease on life….or to use it for a new weave. Moving from lofty dreams to something grounded in the neighbourhood, like a new weave, encapsulates these characters. They dare to dream and think big, but they are grounded in The Heights and in that culture.

Miranda explores similar themes to Hamilton, which include identity, family and chasing the American dream. Unlike Hamilton, the listener can more easily relate to characters in The Heights as they grind to chase their dreams and support each other. The musical has a brilliant sense of family and love, which is truly inspirational. 96,000 gives you an uplifting sense of hope and love that is a welcome journey. You find yourself both rooting for these characters and wishing you could spend an afternoon with them at Usnavi’s corner store.