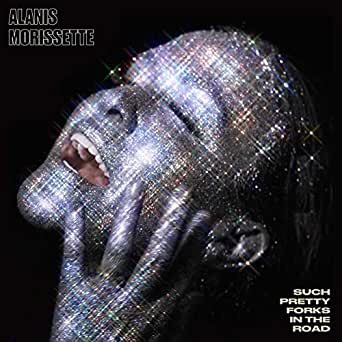 Like most people my age, Alanis Morissette’s Jagged Little Pill defined our college years and made a lasting impression on our musical tastes. It was a flamethrower of catchy alternative pop tracks mixed with powerful feminist anthems. It was a record that had it all. You would find yourself toe tapping to Hand in My Pocket…and if you were me you would light up a Marlboro Red every time she rang out with “one hand in my pocket / and the other one’s flickin’ a cigarette.” But then, you would sit back and listen to Right Through You or You Oughta Know and realise that the slick pop veneer was a Trojan Horse for powerful lyrics calling into question gender, patriarchy and anger towards inequality / double standards. The jagged little pill of toxic masculinity was one wrapped in strong vocals and tight musical arrangements, which forced you to re-evaluate the world around you.

Well, Alanis is back again with her new record Such Pretty Forks in the Road. In the years since Jagged Little Pill she has become a mother and has a Broadway show based on that 90s record. So, how has her life experiences influenced this latest record?

I’ll focus on her track Smiling. This track harkens back to the vocal power, musical mastery and lyrical depth that made Alanis an icon in the 90s. Guitars, percussion, strings and her telltale vocal delivery give the track a foreboding energy. The opening to the track is like a deep fog rolling in over an expansive forest, which envelopes you and won’t let go. She sings about being “off the rails,” “trying to keep it together,” within the “anatomy of my crash.” You think this fall into darkness and regret may swallow you, but this is also the track’s great triumph.

Within this “sound of me hitting bottom” Alanis makes room for smiling and the ability to “keep on moving.” No matter how off the rails her bottom gets, she can still see the “pretty forks in the road,” which leads to “life flashing promise before my eyes.” It is when she hits this lyric that the drums really kick in with a thrashing guitar riff that acts as a lifeline, if only briefly, pulling you above the fog and into the blue sky above. You can come up for air. In that brief moment, you have hope, if you have the strength to keep moving.

Morissette’s vocal power has always come from the contrast within it. Her voice is both dark and powerful, while simultaneously beautiful and fragile. It is this contrast that elevates Smiling and puts it on par with her strongest work on Jagged Little Pill. Because, Smiling is not as much a roadmap on how to live, but a document on life itself. Without hitting bottom or crashing, we would not understand the power and hope found in smiling and moving forward. It is exciting to see Alanis once again become a powerful voice within music. Smiling gives us not only insight into her life as a singer, music icon, woman and mother, but also speaks to the crashes and triumphs that make – up our own lives. Most importantly, it give us hope. Not just hope that things will get better if we keep moving, but hope that we will have more wonderful music from Alanis Morissette, which will continue to inspire us.

2 comments on “Alanis Morissette’s Smiling: A Return to Force”