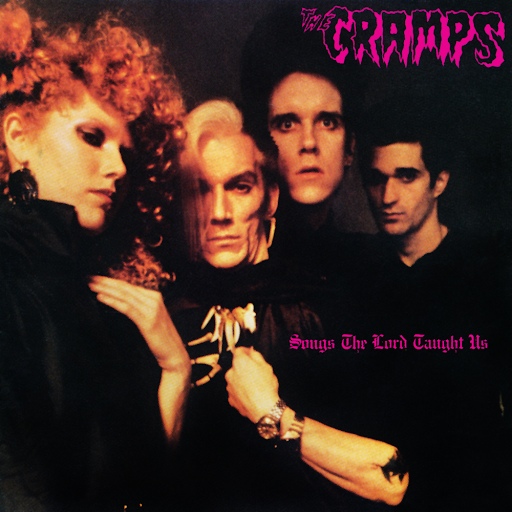 The Cramps is a band that is often overlooked, but paved the way for groups like Marilyn Manson, The Misfits (which we will review in the future), Slipknot and even GWAR. Lux Interior with his whacked out hair and all black leather makes him a cross between an undertaker and a rock god. On the surface, it might seem that The Cramps have nothing in common with Slipknot or GWAR, but elevating horror themes from one off parody songs like Monster Mash in 1962 into musically interesting records was new ground. One can argue that Alice Cooper’s Welcome to my Nightmare in 1975 was trying out horror themes before The Cramps, but it was The Cramps who would really lean into the B movie horror that Alice Cooper dials up to 11 in later years. Even though bands like Slipknot and GWAR embrace the horror theatrics of Alice Cooper and KISS, for me it is The Cramps who take horror and build it into the musical genre others will blow out in the 1990s.

The late 1970s and early 1980s were the golden age of horror music. You had Alice Cooper, KISS, Michael Jackson, The Misfits , AC/DC and Möntley Crüe all embracing the darkness and riding it to hit singles and record sales. Moreover, movies such as Friday the 13th, Hellraiser and Nightmare on Elm Street also fuelled this appetite for horror. For me, The Cramps are the most interesting and Songs the Lord Taught Us is a kick ass record.

The Cramps had a number of different members, but the original core on this record was Lux Interior on vocals, Poison Ivy on guitar, Bryan Gregory also on guitar and Nick Knox on drums. The record itself came out in 1980 and was produced by Alex Chilton from The Box Tops. He is best known for tracks like The Letter and Whiter Shade of Pale, which foreshadow soul and rockabilly notes that he will bring to The Cramps on their record. You can hear Chilton’s raw vocals in Lux Interior’s delivery and rockabilly / soul guitar, which Poison Ivy pushes to the limit. Chilton will go on to produce other Cramps records and continue making music himself, but he never reaches the heights he achieved with The Box Tops.

The first thought provoking track is the iconic I Was a Teenage Werewolf where Lux and Ivy set out the sound, which many punk bands will mirror for years to come. Ivy and drummer Nick Knox kick the song off with a raw Dick Dale horror surfer vibe. The key aspect of Dale’s sound that Ivy and Knox portray is an underlying sense of doom and tension. This is not the surfer sound of the Beach Boys, but taking that surfer vibe and giving it an edge. The cherry on top of this horror sundae is Lux’s unbridled punk vocal, which pairs well with the blown out surf guitar. The Dead Kennedys were around at the same time, and actually played with The Clash and The Cramps, and you can hear some similar playing around with 60s surfer music and 80s punk with their track California Uber Alles. It is interesting to see how these punk bands were playing around with 60s musical touchtones.

Unlike The Clash and The Dead Kennedys, The Cramps leaned into B horror movie tropes and veered away from political messages. I Was a Teenage Werewolf set the scene for other tracks like Zombie Dance, which comes at the tail end of the record. For me, Ivy’s guitar really makes this song run. Her ability to infuse horror and raw power into her 60s surfer inspired guitar is what makes The Cramps’ sound stand alone from other bands at the time. The Misfits take on similar sonic beats, but Ivy’s guitar is never duplicated. On Zombie Dance she really shreds and gives the track a high octane feel that gives it the psychobilly vibe the band will be known for.

All my praise of Poison Ivy’s guitar work is not to take away from Lux’s vocal. He has this voice that is a combination of Elvis, Johnny Rotten and The Texas Chainsaw Massacre. His vocal is so unbridled and animalistic that it has you on the edge of your seat; however, that familiar Elvis croon ground it, ever so tenuously, in reality. This is a style Glenn Danzing and Jello Biafra will use to great effect throughout the 1980s. Lux takes this croon and kicks up the rock and punk to such a level that it is close to unrecognisable. His vocal with Ivy’s guitar and Knox’s percussion creates an audio horror movie that is both thrilling and frightening. You get the sense that at any time the song may explode and take you with it.

The Cramps can get lost with other punk bands such as Black Flag, Dead Kennedys and The Clash; however, they are crucial in how punk moves through the 80s and beyond. I also think that their focus on B horror causes people to discount their musical skill. This is a tight band that is able to twist 60s music styles into something fresh and terrifying. The Cramps, and this record, need a closer look and are the perfect scene setter for Halloween.

Listen to Songs the Lord Taught Us

2 comments on “The Cramps’ Songs the Lord Taught Us: Psychobilly Pioneers”