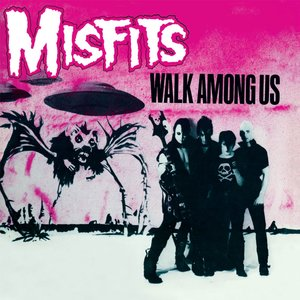 There is no better way to close out Rocktober than to look at one of the most iconic horror records, Walk Among Us. 1982 The Misfits take the Cramp’s B horror movie style to an entirely new level. On stage theatrics and make-up elevates familiar horror tropes into punk performance art. Glen Danzig, Jerry Only, Doyle and Arthur Googy infuse 1980’s punk with a lounge crooner vocal. This unique combination, along with tricked out hair and skull make – up, created the iconic band we know today.

On the surface, you see a ripped guitarist and front man with a large spike of hair running down their corpse-like faces and you think you walked into a haunted house instead of a punk show. However, they put out some solid 1980’s punk. This was at the time where Minor Threat, Dead Kennedys and Black Flag were developing a punk sound that many bands, like Parquet Courts, emulate today. In fact, Henry Rollins has the classic Misfits skull tattooed on each of his arms. During one Black Flag show, Rollins was getting ready in the club and heard some Misfits coming from an upstairs room. He thought that it was cool that someone was playing some Misfits and wanted to go up there and rock out to some Misfits. He walked into the room and saw the Misfits doing a sound check for their own show. The Misfits did more than play music, they produced both Walk Among Us and their 1982 live record Evilive as well. The record itself has a blistering running time of roughly 25 minutes, but still finds a way to pack itself full of horror goodness.

The Misfits set the B horror movie scene with the alien album art, in which the UFOs are from the 1956 movie Earth vs The Flying Saucers and the spider alien is from the 1959 film The Angry Red Planet. They are leaning big into the horror punk vibe and inviting you to come along. What I appreciate most about the Misfits is that they commit to that vibe and play it straight. There is no sense of parody in their hair, make – up or album art, which translates into their music. Going halfway may make the music seem gimmicky, but the Misfits were putting out some solid punk rock. There are thirteen…oooooooo….scary…… Sorry. There are thirteen tracks on this record, so I will focus on my favourite three tracks.

The record kicks off with 20 Eyes, which jumps right off the vinyl. Googy’s drums and Dole’s thrashing guitar resemble Minor Threat and highlight the frenetic pace punk music took during this time. The structure of under two minute songs played at break neck speed will become American punk’s calling card for decades to come. Danzig’s calling card crooning vocals have shades of Lux Interior’s psycho-billy style in the Cramps. This highly theatrical take on a punk vocal is unique and Danzig will develop this even further in his solo work in later years. Thematically, this is a song about H.P. Lovecraft abominations and how they are driving him insane. Putting 20 Eyes as the first track sets the stage for the rest of the horror rollercoaster to follow. Get on board!

In a rare move for a studio record, the Misfits decide to put a live track at the end of side A. This is the famous Mommy, Can I go out and Kill Tonight?, which is about a killer on the loose who is losing his mind. Much of this song is indecipherable due to poor audio quality, but it is musically very interesting. First off, it was recorded in 1981 in New York at The Ritz. It kicks off with the classic punk “1, 2, 3, 4” count in, which is followed by some of the filthiest grinding guitar on the record. You think this is going to be a grimy dirge fest, but then in the middle of the track everything comes to a halt and Danzig yells out “Mommy, can I go out and kill tonight?” From that lyric on, the song kicks into a machine gun of thrashing drums and guitar as Danzig berates you with murder imagery so quickly you can’t understand anything. The music itself overwhelms your senses as you find yourself going into a frenzy with the band. It is an interesting track that is unlike anything else on the record.

The final track is probably my favourite off the record, Astro Zombies. Musically, there is nothing on this track that you have not heard on 20 Eyes. There is Googy’s driving percussion, some solid bass from Jerry Only and Doyle’s unrelenting thrash guitar. However, what sets it apart from the rest of the record is Danzig’s vocal performance. He is at his most lounge crooning best on this track, which is magnificent. His vocal sounds like you took a 1950s rockabilly front man, put him in a time machine and then dropped him off in a 1980s zombie apocalypse. I love it. On the surface, his vocal delivery should not work with this punk structure, but it is irresistibly catchy. It sounds like Elvis crawled out of a crypt to record some punk tracks. Danzig’s vocal is so over the top and theatrical that you are drawn into his horror nightmare.

The Misfits are an iconic band that has had various members over the years, but still puts out music. Glen Danzig, Doyle and Jerry Only are still performing Misfits tracks, which is incredible and highlights the band’s appeal. I mean, Doyle is still ripped and has the spike of hair running down his skull coloured face. I think the band’s commitment to the horror material, along with their combination of Elvis style vocals with Black Flag musical backing is an excellent formula.

Listen to Walk Among Us

0 comments on “The Misfits’ Walk Among Us: Punk’s B Movie Double Feature”