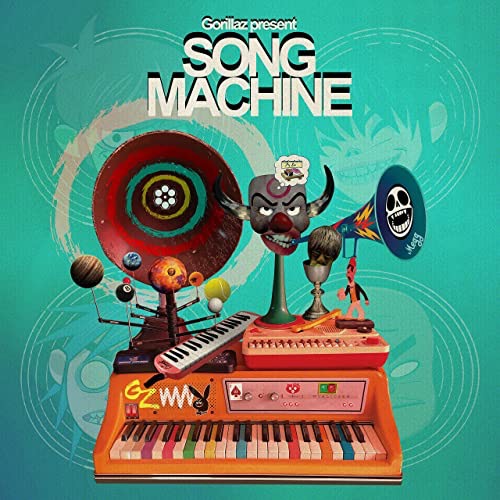 The Gorillaz is part rock band and part performance art. It is billed as a “virtual band” consisting of cartoon alter egos of real band members Damon Albarn, Jamie Hewlett and Remi Kabaka. The “virtual” members of the band are 2-D, Murdoc Niccals, Russel Hobbs and Noodle who are all voiced and represent Albarn and the gang. If you have seen Gorillaz, you have seen these highly stylised cartoons jamming to slick electronic funk landscapes amidst Albarn’s Brit Pop vocals. This combination of virtual / cartoon style with excellent pop musical substance has led to a number of highly successful records.

Gorillaz are not strangers to having highly talented guest musicians on their records. In the past they have featured De La Soul on Feel Good Inc., MF DOOM on November Has Come and Danger Mouse produced the entire Demon Days record coming off his highly acclaimed Grey Album. Their latest record Song Machine: Season One: Strange Timez takes their love of collaboration to whole new heights with different artists on each track. The list of artists is both eclectic and exciting. Names such as: St. Vincent, ScHoolboy Q, Joan As Police Woman, CHAI, Moonchild Sanelly, Unknown Mortal Orchestra, Fatoumata Diawara, Elton John and 6lack litter the liner notes like gold dust on a precious vase. This is a collection of up and coming hip hop artists, world beat singers, rock icons and indie rock heavyweights.

The track we will focus on, The Valley of the Pagans, brings Beck to this cauldron of musical stardom. The track begins with classic Gorillaz, as luscious electronic funk beats set the stage. There is a hint of disco keyboard and funky Prince falsetto notes in the chorus. Funk and electronic dance structures mix to create a Frankenstein monster of Kool and the Gang meets The Presets. Albarn, Hewlett and Kabaka create an incredibly catchy and dancy track that drips of neon and funk.

Lyrically, the track is exploring the decadence of self – absorption as one worships him / herself like a pagan god. It’s about Viagra, Hollywood, control and branding within a fake world made of plastic. Beck channels his inner Mellow Gold as his over produced vocal brings back images of his folk rock back in 1994. Beck has always straddled the line between folk and experimental rock with skill and style. His flat folky delivery on this track gives the lyric a cynicism that hints at the darker side of the pagan valley. Moreover, Albarn’s gruff Brit Pop delivery boarders on robotic and resembles someone coming out of a cocaine induced month long bender. The combination of these vocals with the music and energetic chorus creates an image of a superficial valley that may appear to be all you need, but is ultimately devoid of soul.

This is an interesting track and one that showcases the talents of both Albarn and Beck. It is both a slick / well produced track and one that sings about the cold darkness beneath production. The valley of pagans is nothing but a collection of images and reflections devoid of substance. Interestingly, this track is the exact opposite and delivers lyrical and musical depth.

Listen to The Valley of the Pagans

0 comments on “Gorillaz The Valley of the Pagans: Friends Make Everything Better”