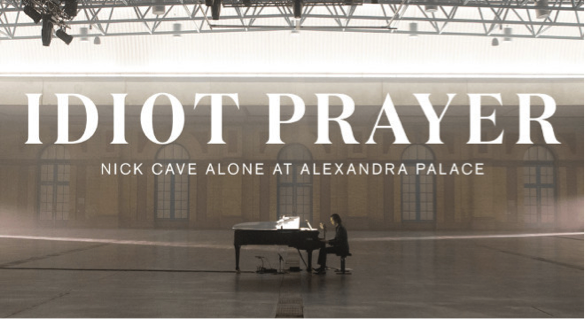 Nick Cave recently performed a solo concert at Alexandra Palace in London on July 23rd. This was an online show with people buying tickets and watching via their computers. If you missed it, Robbie Ryan, a cinematographer who worked on Marriage Story, shot the entire concert as a film with an accompanying soundtrack. The record was released on November 20th and it is both haunting and beautiful.

The concert itself is Nick Cave performing solo on piano for over two hours in a vacant Alexandra Palace. You feel the haunting isolation watching Cave perform in such an expansive and empty space. It feels beautiful and spiritual, while at the same time you feel the weight of COVID isolation. You experience the emotional depth of each track as Cave gives them a fresh artistic feel on piano. However, when the song ends you are greeted with a weighty silence as no one is present to share in the experience. You get the feeling that Cave is the last man on Earth lamenting the planet’s demise with one last expression of beauty. It is an understatement to say that this show is an emotional experience that you will never see again.

There are over 22 masterfully constructed tracks on this record, so it is difficult to narrow the field for this review. The common thread between all of them is COVID and its impact on society / humanity. Therefore, I will look at three of my favourite tracks and comment on how they play differently in this setting. Now, everyone’s experience of COVID has been different. For some, they are still in the midst of isolation and lockdown and this concert may feel like an oasis where they feel a missing sense of connection. For others who may have lockdown lifted, this concert may serve as a reminder of what they have lost and are trying to rebuild. So, you may not connect with what I say in this review based on your experience and I would like to hear rom you about your experience with this record. Please let me know in your comments. With that, let’s take a look at Idiot Prayer.

I think the standout track is Euthanasia. Nick Cave is known mostly for dark and foreboding tales of regret and despair. However, this track showcases how Cave can tell a story of love in a way that is emotionally resonant. He sings of going through time to meet the one you love. Through live and death, you yearn for that smile. That glimpse of the one you love to feel that spiritual connection. A connection you will chase throughout the universe, throughout death and throughout time. The fact that this song ends with a weighty silence gives it both sadness and hope. The silence reinforces the lonely pursuit he takes searching for connection through time. This also hints at the isolation and emotional death people feel in COVID as they are left lonely and searching for human connection. Cave also gives us hope in that he finds the smile “just in time.” In a sense, when all is lost he is able to connect just as he reaches his lowest point. During this trying time, we too can find connection when all seems lost.

We will move forward on this record to an all time great from Cave, which is Into My Arms. Much like the previous track, this is an amazing love song about how love has caused him to rethink everything. Cave sings about everything he does not believe in, God and angels, and how his love for her gives him new belief. In a way, his love is a form of rebirth and belief in the divine. Similar to other tracks on this record, Cave is commenting on human connection and belief. It is interesting that he is exploring these themes during COVID, where human connection is compromised and one’s beliefs are constantly questioned. I believe that Cave is acting as the divine power creating spaces for people to connect. Even though you feel the weight of disconnection with the oppressive silence at the end of the track, he is providing a connection point for people in isolation. We can connect over the music and for a brief moment we are sharing an emotional experience with Cave.

Above all else, the music on this record is impeccable. Cave’s performance on piano is fragile and beautiful, while his deep voice brings each track an unparalleled emotional power. This is evident on the title track Idiot Prayer. In this one track he touches on all the major themes on the record. He explores spirituality, love, humanity, regret and death. On his deathbed Cave sings about longing for his love who may be in heaven or hell. He prays to see her in the next life, but is it an idiot prayer? Are his wishes nothing but useless words thrown into the void, or will they lead him to connection after death? Is it an idiot prayer? In a sense, is hope an idiots prayer? Just words we tell ourselves to comfort the pain, but have no significance beyond that? These are all questions we ask ourselves as we hope for a brighter future after COVID. For Cave, the song posits these questions, but it is the belief the songs has that they will meet after his death that gives hope. Because the prayer itself isn’t important, what is important is your faith and how it brings you hope amongst desolation. In reality, the idiot is not the one who prays where all hope is lost, but the one who resigns to his situation and gives up all hope.

In short, this is a top three record of the year, in a year that has some tremendous music. But this is more than just a record. This is a musical life preserver Cave is throwing us as we drowned in a sea of COVID, hopelessness and isolation. Even though these tracks are ones we have heard before, Cave’s performance and the existence of the record at all is what is important. Praying for connection and hope is not the words of an idiot. Cave’s incredible performance and excellent song choice is a roadmap to hope. His performance stands as a lighthouse amidst the fog where we can follow it to salvation. This may seem like hyperbole, but this concert record reminds us of beauty in the world and that we will come out of this together.

0 comments on “Nick Cave’s Idiot Prayer: Loneliness and Beauty in the Time of COVID”

Just came in from @cigarhustler. All set for the next dedication show. Love it. @thecrownedheads
Have you ever eaten a chocolate covered coffee bean and then have it hit you in the face?? I think I just did. @tatuajeinc @cigar_coop
Ahhhh the memories. @seths_humidor
@hbtcigar Pure Fela @cigar_coop