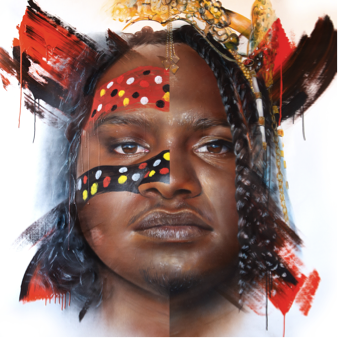 Baker Boy is a fast rising Indigenous rapper from Arnhem Land in Australia whose first record Gela is about to be released. He teams up with G Flip on one of the lead singles My Mind. This is an interesting pairing that made for an incredibly danceable track with a ton of heart and soul.

Baker Boy is well known in Australia for rapping in both Australian English and his mob’s Indigenous language. Some examples of this are Cool as Hell and Move, which highlight Baker Boy’s dual identity as a proud Indigenous man living in Australia. In essence, he is showing you code switching in real time. On the other end of the Australian musical spectrum is G Flip, who is a fresh woman artist who is firmly placed in the indie rock scene. Having said that, one commonality is that G Flip also sings about identity, especially gender; Boys and Girls and I am Not Afraid are both prime examples.

Both artists pair up in one of the funkiest dance tracks this year. Baker Boy can always get you moving and his songs are dancing gems. He can also spit fire and his rhymes are at the top of his game. Also, G Flip really fits this electro funk with a very dirty vocal that seems to fit right in. Baker also raps in his native Indigenous language; however, his delivery is so tight you can seamlessly move in between the two languages and not miss a beat. This is a fun song that warms your heart.

Baker Boy excels as well constructed and executed duets. For example, Meditjin with Jess B is an incredible track that made my top 50 that year. Side note, Jess B goes on that track and just levels the block…just steals the track and laughs as she drops the mic…think Nicki Minaj in Monster. Back to the track at hand, My Mind is another example of how Baker Boy can match the style of his song mate in order to create a solid track. This is an amazing track that everyone needs to hear and celebrate how a proud man from Arnhem Land can showcase his culture to the world through music.

Listen to My Mind

1 comment on “Baker Boy’s and G Flip’s My Mind: Brining Australia Together”